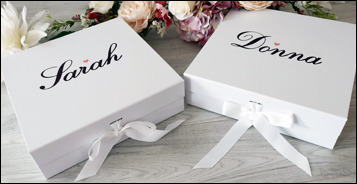 Everyone at your wedding is important but those standing next to you at the altar hold a special meaning. Aside from being closest, they’ve helped get you to your big day. Alongside saying how thankful you are for their time and assistance, a keepsake is a tangible reminder of their value.

Although it may seem like a task you can leave for the last minute, doing so may make it obvious by limiting your options. You don’t want to settle for something or worse, have your bridesmaids feel as if you did.

While you should stay within the same price range (whatever that may be), don’t give your bridesmaids the same present. Even though it’s easier, they don’t have the same interests or wants. Selecting gifts with special meanings lets them know you took time to show how valuable they are to you. Add a touching message to make them even more personal.

While each contributed to your shower, decision making and preparation, your maid of honor had the most responsibilities. Giving her a pricier or extra special gift is appropriate. Don’t be too extravagant though as that may make the others appear insignificant.

If the presents are ones to be incorporated in your wedding, it’s best to give them while getting ready so they aren’t accidentally left behind. Otherwise, doing so at the rehearsal is great. That way, the girls can take them home without worrying about keeping track of them during the festivities.

Sometimes it seems as if there’s another cost at every turn. With all the love and support your closest friends have given you, this should be an expense you are more than pleased to include in your budget.